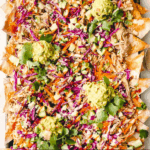 If putting an Asian spin on guacamole wasn’t weird enough, I just went ahead and did the same to nachos. Trust me though, you’re gonna want to go all in on this one. If there was ever a nacho recipe to be a major hit at a game day party, these Asian Chicken Wonton Nachos just might be it.

Simply put, they’re are so incredibly good, I could have devoured the whole pan myself. And, they’re pretty darn healthy which is definitely a win-win, especially since we’re dealing with game day appetizers here!

How to make the nachos

There you have it! Six layers of maximum flavor with so many amazing textures coming together in one bite. It’s best to lay out some forks when serving because things are bound to get a little messy with all the toppings and sauces involved. And as with any good appetizer at a Super Bowl gathering, once they’re on the table, get in there right away because these nachos will be gone before you know it!

The ultimate plate of nachos with an Asian twist! Layers of tender pulled chicken, crisp veggies, and guac piled high on top of sesame wonton chips.