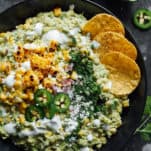 Can you ever go wrong with guacamole? From the most basic combination of avocado, cilantro, and lime juice to the more elaborate dips studded with all kinds of extra add-ins, guacamole never disappoints. Everyone is in their happy place when guacamole and chips show up on the appetizer spread!

Store bought guac is great, but there is something extra special about making guacamole from scratch. Never have I been more of a believer in food uniting and healing than when I made guacamole for a family get together. On the day of my dad’s funeral, my mom and I hosted family members at her house following the service.

Even though we were in the thick of our grief, my mom and I decided to prepare a taco bar for guests because it’s easy enough to do and in my opinion, every family gathering, despite the circumstances, needs food. I volunteered to make guacamole, which I held off on making until the day of so it would be fresh.

Still overcoming the raw emotions from the funeral, my family and I sat at the kitchen island wavering between small talk and awkward silence. But once I reached for the cutting board and started slicing the avocados and juicing the limes, everyone’s eyes widened a bit with delight. They had no idea there would be food at this post-funeral get together, let alone chips and guac and later to be discovered, tacos! Family members began asking questions about the process of making guacamole, and before I knew it, the atmosphere started feeling like the lakeside family gatherings from my childhood that to this day, I treasure so dearly. It was exactly what we all needed in that moment. And when the chips and guac hit the table, it was gone in minutes!

All this to say, times are particularly stressful, frustrating, and sad right now, given this everlasting pandemic and the uncertainty regarding the upcoming school year. Chips and guac are certainly not a cure, but I know from first hand experience that they can be the perfect pick-me-up during a rough day. I’ve been cooking and baking a whole lot over the last few months and have really enjoyed the less hurried, more relaxed approach I’ve taken in the kitchen. Preparing and enjoying food, especially with close family and friends nearby, is an excellent reminder of your blessings in the midst of hard times.

Now, let’s dig into this Elote Guacamole so you can make it for your loved ones!

Let’s talk about elote. What is it? Elote is Mexican street corn, typically consisting of roasted or grilled sweet corn slathered in a combination of tangy mayonnaise and Mexican crema, seasoned with spices like chili powder, and finished with a sprinkle of cotija cheese. If you’re unfamiliar with Mexican crema, it’s similar to creme fraiche and sour cream with it’s smooth, creamy texture and tangy flavor. Cotija cheese is a crumbly, salty cheese similar to feta in flavor and texture.

Perhaps you’ve seen recipes for Mexican corn dips or corn salads pop up on your social media feeds. These dips and salads are typically inspired by elote. So if you’re a fan of those and you love guacamole, this elote version will be right up your alley.

How to Make Elote Guacamole

Now that we’re familiar with the main components of elote, let’s break down the steps to make this Elote Guacamole.

As the end of this post draws near, I can’t tell you the number of times the word “elote” has auto-corrected to “elite”. But hey, I think my computer is on to something because I would definitely consider this an elite guacamole if there ever could be such a thing. The salty-tangy-creamy corn dip combined with the fresh guacamole creates the most amazing combination of flavors and textures. And to top it off, you’ll love the little bursts of sweet corn kernels in each bite. Now, go grab a bag of your favorite tortilla chips and snack to your heart’s content!

Dash of salt and pepper

Dash of salt and pepper 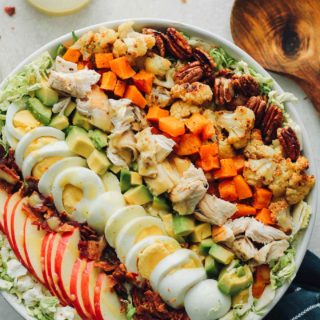