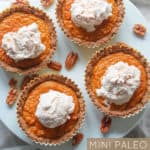 These Mini Pumpkin Pies are a wholesome paleo version of the classic Thanksgiving dessert that’s sure to please any pumpkin pie fan.

As a Minnesotan, lover of food, and lover of any type of festival involving food, I’m surprised I have yet to mention the Great Minnesota Get Together on the blog. For those unfamiliar, I’m talking about the Minnesota State Fair –also known as 12 straight days of fried food, food on a stick, concerts, rides, swag, cow milking, pig birthing, miracle product demos, blue ribbon art displays, and butter. The Princess Kay of the Milky Way carved into a ginormous slab of butter to be exact.

My summers aren’t complete without a trip or two to the fair. Growing up, my mom and I would spend 14-hour days there, beginning with mini donuts in the morning and catching the 10pm WCCO newscast, fireworks, and maybe a final basket of cheese curds on the way out.

So what does the Minnesota State Fair have to do with these lovely Mini Pumpkin Pies? I’m (slowly) getting there! Let me share another fun fact about my love affair with the fair. The food options are overwhelmingly amazing, and I take the food aspect of the fair very seriously. Two months before the gates open, the new food offerings are announced and the anticipation starts to build among avid fair foodies. On that day, every other post on my Facebook newsfeed is a sharing of the local news sites’ online photo galleries of new foods.

Tip from a pro: get your hands on the list. Yes, the new fair food list is a thing. This year I was super organized and busted out my highlighter to plot out each food booth on the map beforehand. And you bet I cross-referenced it like a mad woman at the fair while juggling sippy cups, ketchup-drenched, half eaten pronto pups, and two kids climbing in, on, and under their double stroller…in 90 degree heat. But I mean c’mon, fried jalapeno popper balls? Kimchi and curry poutine? A pretzel croissant chicken sammy? Wild rice eggs benedict? Fried kale with chili sauce? How could I not try all. of. that? (p.s. I didn’t. But I wanted to!)

So while at the fair, in the midst of my obsessive micro-managing of our new fair food consumption, my poor husband was patiently waiting for us to make our way to his food booth of choice, the pie and ice cream stand, which I had swiftly dismissed because IT’S NOT A NEW FOOD THIS YEAR. IT’S NOT ON THE LIST. ALSO, ARE YOU CRAZY? PIE IN 90 DEGREE WEATHER?

I gave in. But I was still shaking my head in disbelief as he fed me a spoonful like a parent feeding their resistant kid cough syrup. BUT one bite. And the heavens opened. Warm, gooey pumpkin pie with buttery crust and creamy cinnamon ice cream all around. There I was, in the sweltering heat, humidity to the max, with sweat running down my face, devouring this warm Thanksgiving dessert. I vowed right then and there that I would make a healthier version of the pie and ice cream and share it on the blog.

The hardest part was having to wait for fall to arrive! But finally, we’re here, and I’m so thrilled to share these luscious Mini Pumpkin Pies with you! The wholesome crust is made out of crushed pecans and dates, and the filling is the same one I used in these Pumpkin Pie Greek Yogurt Parfaits. These pies are naturally sweetened with no butter or flour needed! Extra benefits? They’re gluten-free and paleo-friendly!

For the crust, you’ll ground up the nuts and dates in the food processor and press them into baking cups. I found these cute, decorative ones at Target in the baking utensil aisle. Pop the crusts in the oven for a few minutes. While they’re baking, throw all the filling ingredients into a big bowl and whisk until incorporated. Pour the filling into the crust cavities and bake until the filling is set.

And then, please don’t forget the best part: a big scoop of Cinnamon Ice Cream over the top!

So the moral of the story… Your husband is always right. Bahahahahahaa…no.  I think it’s more like: be open to absurd experiences, like trying warm pumpkin pie with cinnamon ice cream on a 90 degree day because those experiences just might become a treasured memory, a new tradition (next year I’m making a beeline for the pie stand as soon as I arrive) , or the perfect story and recipe to share with friends.

These Mini Pumpkin Pies are a wholesome paleo version of the classic Thanksgiving dessert that’s sure to please any pumpkin pie fan.