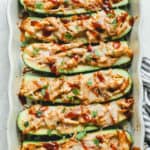 All of your favorite BBQ chicken pizza toppings stuffed into zucchini boats! These BBQ Chicken Zucchini boats are loaded with with tangy BBQ shredded chicken, red onion, smoked gouda and mozzarella cheeses and topped with cilantro just like the classic pizza.

Who needs pizza crust when it’s zucchini season? One of my favorite things to do with a summer surplus of zucchini is to hollow out zucchini halves and use them as boats to hold all of my favorite pizza toppings and sandwich flavors. I’ve already gone the buffalo chicken route, so it was time to switch to my other favorite kind of chicken.

How to Prepare the BBQ Chicken

Let’s talk about the most flavorful part of this dish, the BBQ chicken. You’ll need 3 cups of cooked and shredded chicken for this recipe. A rotisserie chicken from the grocery store will yield chicken that easily shreds and provides so much flavor. You can also cook chicken breasts in the Instant Pot or slow cooker or use any leftover grilled or cooked chicken that you may have on hand. Once you have your 3 cups of shredded chicken, you’ll simply combine the chicken with about 2/3 cup of your favorite BBQ sauce and thinly sliced red onion.

In addition to the BBQ chicken, the other essential components for BBQ Chicken Zucchini Boats are:

If you want to get creative and add additional flavor to your zucchini boats, here are a few other filling ideas:

How to Make the BBQ Chicken Zucchini Boats

And that’s all there is to it! If you’re in the mood for pizza and have plenty of zucchini on hand, these BBQ Chicken Zucchini boats are the answer! Not only are they quick and easy to prepare, but they make for a healthy, filling meal the whole family will enjoy.

I’m so excited to be showcasing my produce finds from my local market, the Shoreview Farmer’s Market, for this recipe series. If you are local to the Twin Cities of Minnesota, specifically the northeastern suburbs, be sure to visit to the Shoreview Farmer’s Market on Tuesday evenings through mid-October. Local fresh produce, handcrafted artisan items, and live entertainment are featured each week!

Check out the other recipes in the Farmer’s Market Series:

All of your favorite BBQ chicken pizza toppings stuffed into zucchini boats! These BBQ Chicken Zucchini boats are loaded with with tangy BBQ shredded chicken, red onion, smoked gouda and mozzarella cheeses and topped with cilantro just like the classic pizza.